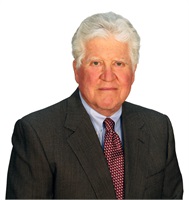 Joe Kercheville is a proud direct descendant of two Texas immigrants who participated in securing Texas independence.  Colonel Jesse L. McCrocklin took part in the Siege of Bexar in 1835 and the Battle of San Jacinto in 1836.  Further, in 1842 he served in the Somervell Expedition.  For his military service, Colonel McCrocklin received the first land grant within present Blanco County.

In 1842, Andrew Jackson (A.J.) Kercheville, then in Mobile, Alabama, answered the call to arms by joining the Republic of Texas Militia.  The threat of Mexican aggression at that time lasted only a few months, but again he answered the call in 1846 in the U.S. War with Mexico by joining the 1st Alabama Regiment.  After that war, he traveled back to Texas where in 1852 he married Mary Milam McCrocklin, the daughter of Colonel Jesse L. McCrocklin.

The McCrocklin and Kercheville families settled on the McCrocklin land grant and A.J. and Mary Kercheville’s son, Richard, was purported to be the first Anglo child born in what would become Blanco County.

During the U.S. Civil War, A.J. Kercheville served in the Texas State Troops (TST) organized to protect the frontier from Indians and bushwhackers.  He also enlisted in the Minute Men for Blanco County and was elected Captain for Comal County TST.  Following the war, Captain Kercheville was elected Sheriff of Blanco County.

The Kercheville family is proud of the legacy left by these early fighters for Texas independence.

Joe Kercheville is a native of San Antonio and a fifth-generation Texan.  He began his career in 1967 as a stockbroker at Dittmar & Company--a regional brokerage firm in San Antonio.  Seven years and several mergers later, Joe joined Rotan Mosle, Inc--a Houston-based brokerage house--where he became the firms top producing broker in Texas.  In 1983, Rotan Mosle was acquired by Paine Webber.

Preferring the personalized service of independent firms and tired of being merged into larger investment banks, Joe decided to go out on his own.  In 1984 he along with Richard Arneson--a friend, mentor and former President at Dittmar & Company-- launched the local investment firm that today bears the Kercheville name (Arneson retired in 1991).  Since inception, Joe has followed through with his founding vision by delivering outstanding service and returns while remaining independently-owned and highly committed to the individual needs of his clients and the community.

Joe graduated from the University of Texas at Austin in 1964 with a Bachelor of Business Administration, majoring in Finance.  In 1966 he earned his MBA from the American Institute of Foreign Trade, in Glendale, Arizona (Thunderbird).  From 1998 through December 2007, Joe managed Blanco Partners--a hedge fund delivering an audited, compounded annual return of 15.89%.**

Joe Kercheville's passion, integrity, discipline and foresight continue to set the standards for all employees of Kercheville Advisors.

** These numbers are net of expenses and management fees, but prior to the 20% hedge fund performance fee. Past performance is not necessarily indicative of future returns.  All investments involve risk and may lose money.  Kercheville Advisors makes no assurance that investment objectives will be met.